To celebrate this great event the Club held a:-

PCC 25th Anniversary Camping Weekend from the 10th to the 12thJune 2016  on the River Medway in Kent.

About 24 current PCC members and 6 previous members joined PCC for our anniversary weekend at the Hop farm camp site in kent on the river Medway . During the weekend we organised two river trips. On Saturday we paddled up stream to Oak Weir Lock

On Saturday’s trip everyone enjoyed going down the canoe shoots at East Lock and Oak Weir Lock. 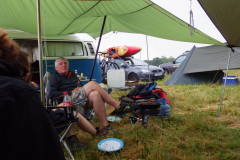 On Saturday evening we had  a Barbecue followed by the Club’s AGM where our president Noel Humphrey was awarded a 25 long service award from British Canoeing for all his services to the sport including setting up Purley Canoe Club in 1991.

On Sunday we paddled down stream to Yalding and Teapot Island which involved paddling down the canoe shoot at Sluice weir. On Sunday we also held a Come and Try it” sessions, trying out various boats, .

This is what our club President and founder, Noel Humphrey said about the weekend:-

“I am sure you all agree that the 25th Anniversary weekend was a great success. This was probably the biggest event in terms of numbers that we have ever organised and would not happen without the contribution of many people.”